I should be writing. Instead I’m sitting at the water’s edge of the pond, watching an enormous bullfrog.

He (she?) is sitting there, immobile. He’s waiting. Like me.

Except he’s waiting for insects and I’m waiting for ideas about how to end the story I’m working on. It’s a little story and I’ve spent far too much time on it, but I can’t seem to let it go.

“Better times come to those who wait.” So they say. Not necessarily. It depends on how you wait!

I’ve never been good at waiting. Usually I get too impatient and try push things ahead – which is when something inevitably goes wrong, whether I’m writing or trying to change a hotel room because I don’t like being next to the ice machine. I take the story somewhere it really doesn’t want to go and find myself blocked; I end up in a room with a brick wall two inches from the window.

What about active waiting? That bullfrog is waiting for a tasty morsel to come by! He’s also at the ready – for whatever insect might pass his way, whether in the water, the air or in the grass. Active waiting means being relaxed but hyper-vigilant.

I start watching with him. I want to see him pounce!

As we sit there, I start to see…

…in the most amazing detail…colors, stripes and spots, transparency of wing, shape of eyes, of bodies, lightness of moving… 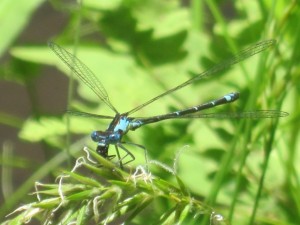 This reminds me of a samurai exercise in a butoh class years ago. We had to kneel on the floor, at the ready. At the signal we were to leap to our feet. The waiting went on and on and on and I could feel my muscles seizing up – I’d surely end up flat on my face when I leaped into action, rather than on my feet.

At some point, forcing myself to stay still but alert became effortless. That’s when you start to notice all kinds of details – the sounds inside the building and outside, the light in the room and how it changes, the smudges on the window, the scratches on the floor, the breathing of the person next to you.

This is exactly what I need to do with my story that’s giving me problems. Go back and re-read, not trying so hard, not picking out details and forcing them to be significant. No, I need to read keeping an open mind, staying alert.

That will allow details to present themselves to me, pop into my consciousness. Those details will be the important ones, the ones that I can experiment with to take my story forward.

But it’s nice down here by the pond, so for now I’ll stay with the bullfrog!

The Art of Noticing

A Smartphone? Waiting is my Dreamtime!

Writer Unboxed: One Second of Detail

6 thoughts on “Waiting: A Writing Lesson From A Samurai Bullfrog”