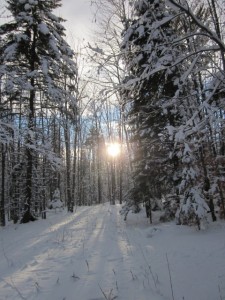 I finally make myself get into my boots, gloves, hat, neck roll, big coat, boot grippers and go to the gym. Head down, I lean into -24 C. Stop in my tracks. Feel the cold on my face, the icy wind, the stinging hail-like snow. Become aware of a strange creaking sound – the city is creaking all around me. No blaring horns and whooshing tires and squealing brakes from the passing traffic, just this strange creak of snow under tires. Beyond the creak – silence. What am I doing? I’m marking out a moment. Last year raced by. So often days became a blur. I’d finish one thing, rush on to the next.

Every day includes much more non-being than being. This is always so. One walks, eats, sees things, deals with what has to be done; the broken vacuum cleaner; ordering dinner; washing; cooking dinner. When it is a bad day the proportion of non-being is much larger. Virginia Woolf

So my new year’s resolution? Carve out a moment of being every day. And that means a moment of being attentive to the details of what I am doing, thinking, sensing.  I thought I would start by taking up journal writing again but this great article by Keri Smith gave me a better plan: the idea of ‘fives’. Every day I would write down five particular moments I had noticed. No sooner had I started than I changed my rules! Instead of ending the day wondering what moments I could remember, I would actively search for my moments. Every evening I would choose a focus or theme for the day. This could be :

Another change of rules! To make things easier, I wrote down a whole number of possible ‘fives’ themes on slips of paper and put them into an envelope. In the morning all I have to do is pull one out. Sometimes it’s very quick – just five words or five lines or five sketches on the page. But often, once I start, I get carried away describing the details. I write my ‘five’ the day after I’ve experienced them. Why? That extra time lag means I have to work a little harder to reproduce and secure experiences and details of an ordinary-but-hectic yesterday. Good for my brain!

Noticing can take many forms. One trick is to count things. Scientists love to count stuff. How many trees are there on the sides of a steep hill compared with its crest? How many leaves are there on the stalks of the blue flowers compared to the yellow ones? […] Other things scientists love: shapes, colors, patterns. Do the rocks at the stream’s edge look different from the ones near the trail? Do the big cattails have the same color as the small ones? Adam Frank

How to start a journal – and keep it up by Keri Smith, The Guardian

Noticing: How to take a walk in the woods by Adam Frank

Dani Shapiro’s blog: Moments of Being

1 thought on “Paying Attention: The Art of Noticing”

Let me know what you think... Cancel reply