Marnie leans forward and gazes into the translucent sphere. A sky blue thread and a wisp of gold drift through the crystal ball.

“What do you see?” she whispers.

Marnie leaps to her feet, sending the chair toppling backwards. Jeremy? No! It cannot be! Never!

The cards are worn and creased. They are not easy to shuffle. A couple fall out of the pack. Marnie picks them up, shuffles again.

“Focus,” says the young woman with the long shining hair, tapping the ash off her cigarette on to the floor.

Marnie focuses…his wavy dark hair, the tattoo on his left…

She places the pack face down on the table.

“Pick one.” The young woman with the long shining hair takes a drag on her cigarette.

Which one should Marnie pick? This one? Or this one?

“Jack of Hearts. A fair-haired young man who…”

She must pick better this time. This one. This is the right one.

“Seven of Hearts. A young man with….”

“With a fickle heart.”

“Drink.” The Reader nods at the porcelain tea cup. “Left hand,” she says sharply. She runs her fingers through the long silken fringe of her shawl.

Marnie takes the cup in her left hand, drinks, swirls the dregs in a circle to the right three times, then places the cup upside down on the saucer. Brown liquid seeps out beneath the cup’s rim.

Who will it be? Marnie can hardly breathe.

The Reader gazes into the cup, turns it, gazes, turns it again.

Noooooo. It can’t be true.

“Look on the bright side,” the Reader says. “At least you will have a nice mother-in-law.”

On her Sunday off, Marnie walks to the other side of the mountain. She squats on her heels in the heat of the afternoon sun, watching the Alectryomancer cast grain over the dry ground. His rooster perches on the peaked roof of the barn.

The Alectryomancer ties up the sack of grain, whistles to his rooster, and squats beside Marnie. He sucks on his empty pipe, closes his eyes.

The rooster can eat no more. It takes two tries before it can get airborne and fly back up to the peaked roof.

Marnie wonders if she should give the Alectryomancer a little nudge. His pipe is lying on the ground and he’s snoring lightly. He snorts as the rooster lands heavily on the roof, and wakes up.

The Alectryomancer gets to his feet with much creaking of joints. He walks slowly, reading the letters the bird has pecked in the grain: “…T…no, make that a J” (noooo!) “C….W…X…E…R…L…S…”

She glares at him. A tranquil smile spreads across his wrinkled face and he shrugs. “Que sera, sera.”

All day Marnie’s been peeling apples. She peels each one carefully. An unbroken strip of peel, that’s what she needs.

When she has her one unbroken strip, she’ll throw the peel back over her left shoulder and see the initial of the man she will marry.

But so far she has not managed a complete peel, even though she’s been so careful.

She sways, punch drunk, as though the apples in the bowls on the table in front of her have fermented, as though she’s drunk glass after glass of cider. Her hands smell of apple, and her arms, her skin.

The peel in her hands breaks. She starts on a new apple.

She will become the master of her destiny! She will! 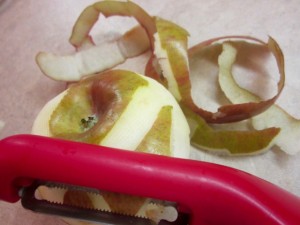 Thank you for dropping by to read this week’s Blurt. It was inspired by the Daily Prompt’s Weekly Photo Challenge: Future. I tried this ‘apple peel forecasting’ more than once in my very early teens in England! Never managed a single peel.

2 thoughts on “See The Future In An Apple Peel”