One afternoon my husband disappeared. It seemed he had vanished from the face of the earth.

I eventually tracked him down in the Trauma Centre at Montreal General Hospital where he was lying on a board in a neck brace, one eye completely closed, lip swollen, beard caked in blood, face covered in bruises and cuts. The injuries from his fall on the ice led to complications that eventually meant we had to cancel our upcoming trip to the U.K.

My sister, obviously worried that I might become depressed after all the stress and anxiety and cancellations, forwarded me a link to an article about happiness and how to achieve it…positive thinking, controlled breathing, meditation… Yeah, yeah. Sure.

For me, there’s no better way to get back to a happier, airier frame of mind after periods of stress and worry than sorting my overloaded bookshelves.

That 1947 Encyclopedia Britannica is just gathering dust. A lot of dust. Two shelves’ worth of dust. We rarely (never) refer to it but keep it because it belonged to my husband’s parents. We have other things of theirs that we enjoy. Time to bid it farewell.

But what to do with it?

And with those books I know I’ll never read again?

And all those literary journals? I used to leave them in cafés around Montreal for others to discover, but kind baristas would keep them and return them to me the next time I went in.

There’s the local church bazaar of course, but that doesn’t happen until November. If I’m to find my happy feeling, I have to get them all out now.

So, off I go with the novels to the hospital’s Book Nook that I discovered during a break from the Trauma Unit when searching for a latte. The literary journals make their way to another Book Nook (Take a Book, Leave a Book) – this one in The Hive Café Co-Op in the Hall Building of Concordia University.

Turns out no one wants an old Encyclopedia.

Put it in the recycling, I’m told.

Recycling? Really? Must I?

I hate the thought of any book going into the recycling.

But one volume a week, into the recycling bag it’s going to go. 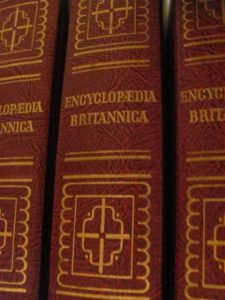