My aunt Cicely was singing in the kitchen. Of her love. At least, that’s what my mother said.

“For Uncle Jeremy?” I giggled. It was hard to imagine Uncle Jeremy as anyone’s love. He was old for one thing, almost fifty. And had very little hair and a lot of stomach. And only talked about how many dragons he’d slain in his video game.

Poor Aunt Cicely! To be married to Uncle Jeremy and love someone else.

All that summer we stayed with them, I often heard Aunt Cicely singing in the kitchen of her love. 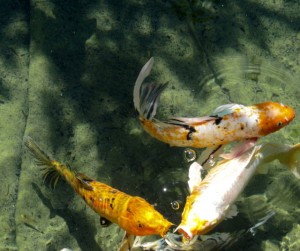 I tried to catch the words but couldn’t make head or tail of them.

(Marie was my mother.)

I imagined her love – he’d be tall, with a blond mane of hair and one of those long low sports cars. He’d have a name like Gideon, or Hawk.