The Shine came on Tuesday and left late Saturday evening.

But how many days or weeks had passed between that Tuesday and Saturday?

Some claimed it had been years, decades or possibly centuries. “Think of Snow White,” they said.

Others pooh-poohed any idea that more than the usual Wednesday, Thursday and Friday had slipped by.

“Look,” they said. “No flowers faded while we were in the Shine. Someone has END_OF_DOCUMENT_TOKEN_TO_BE_REPLACED

I see its shadow first. The shadow of the one with the big humped shoulders. The misshapen, distorted shadow flits across my open newspaper like a dark breath.

Then comes the cawing – a raucous cacophony. The sky is full of crows.

While the other crows circle and shriek, the hump-shouldered crow sits in the tree beside my chair, silent. Its eyes are blank and dull, its feathers mangy and moth-eaten, showing bald patches on its stomach and head. We stare at each other. I’m the first to look away.

The flock of crows takes off into the woods. Only the hump-shouldered crow remains. I END_OF_DOCUMENT_TOKEN_TO_BE_REPLACED

Her hair was a disaster, matted, dull and tangled. But her fingernails were immaculate – long and smooth.

Her top was like a shroud, draping shapelessly over her shoulders. But her skirt was as glorious and brilliant as a wedding gown.

On her left foot a worn running shoe with scarcely any of the sole remaining, on the right a END_OF_DOCUMENT_TOKEN_TO_BE_REPLACED

the touch of his icy fingers
sweet murmur of white doves 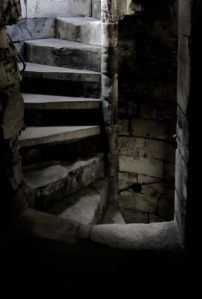 He could hew wood with his axe at a speed that put every other man in the village to shame. He could light a fire quicker than you could draw a breath. He could stack firewood, build a table, a chair, a bed. He was ready.

It was time for him to begin his Bride Quest.

What he wanted was not just any wife, he wanted a wife who END_OF_DOCUMENT_TOKEN_TO_BE_REPLACED

Ice Boy wants out. Enough of living in an ice cube. There has to be more to life than sub-zero temperatures, icicles and snow.

He wants sun and warmth. He dreams of a desert island – sand, palm trees, a tube of SPF 30 suntan lotion, a straw hat. Soft twangy music. He’d get himself a grass skirt, dance a little. Shades. He definitely wants shades. The mirrored kind that turn from blue to green to magenta and stop other people knowing what you’re thinking. A cocktail of course. He’d have to have a cocktail. A red one in a curvy glass with a yellow umbrella perched on top.

Ice Boy chips and scrapes and wriggles all night. His fingers are raw, his fingernails broken, he’s exhausted. But by morning he’s gone.

This is Blurt#38 in my Year of the Blurt! My new year’s resolution was to write one Blurt – a quick, spontaneous story – each week through 2016. Thanks for visiting.

The waters heave the boat and my stomach upwards. The railing slips out of my grasp. Arms flailing, I slide along the deck now slick with salt water.

Then we round the spit of the island and the engine cuts out. The boat floats calmly in silk-smooth water.

After the rush of the wind, and the slapping of waves against the hull, the silence is overwhelming. They say silence is golden, but this silence, smothered by dense mist, is not.

No sound from the birds, even though we are now right up close to the island. In clear weather we would be able to see the rocks rising above us, every inch covered by gannets.

We all seem to be waiting, listening. The captain stands with his head slightly cocked like a setter poised for his special signal.

A scream shatters the silence. Everyone on the boat, the young couple unable to tear themselves out of each others arms, the elderly man drowning in his oversize slicker, the couple with a teenage son whose eyes show white whenever they address him, the middle-aged couple with stony parallel gazes, the captain and his sidekick, a young man with a dreamy look and beer cans stashed beneath the life jackets… Everyone stares at me in that misty suffocating silence.

“What was that?” I ask. They are cramming themselves into the captain’s little cabin, trying to get as far away from me as possible. “What was it?”

But I know what it was. It was I who had screamed.

Another scream. This time not mine. Coming from high above us, from atop the rocky cliff.

A gannet swoops low over the boat, and I duck and shield myself against its passing shadow.

A winch rattles. The dreamy young man spits out a mouthful of expletives.

The boat flounders and I stagger. As I right myself, I notice a little girl in a shiny plastic raincoat, sitting on the bench, bare feet swinging.

Where are her parents, and what are they thinking of to let her sit all by herself in the boat? She isn’t even wearing a life-jacket.

“So what shall we do?” the girl asks. She smiles at me expectantly.

“Yes,” she says. “You called, so I came. Now we have to do something. Those are the rules.”

“Yes. Didn’t you hear me answer?” That second scream had been hers? How could such a little girl produce a sound like that? “So what shall we do?”

“Whose child is this?” I demand of my fellow passengers.

In one easy movement, the girl hops up on the edge of the boat. I rush to grab her but she skips nimbly out of reach. “We could do this.” She hops along the edge on one foot.

“You’re going to fall. Get down this minute.”

“Or this.” The girl performs a double pirouette.

“Don’t be ridiculous,” I say. “Someone my age doesn’t do that sort of thing.”

“We have to follow the rules,” the girl insists. “I came when you called so now we have to do something. And if you don’t have any suggestions, then you have to do what I say. How about we do this?” She kicks her feet forward and up over her head in a back flip.

The thought of myself dancing up there on the railing is so ludicrous that I laugh out loud. The mist splits open, the sun breaks through, making the plastic raincoat sparkle. I stretch out my arms to lift her down. “Oh my dear, if only I could. What a delightful idea! Now, why don’t you come down and I’ll give you a nice piece of chocolate, there’s a good girl.”

“You don’t understand,” she says. “You called. So now you have to do something.” 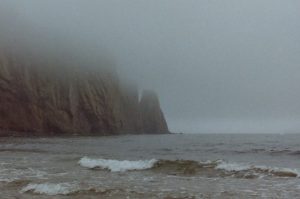 The photos are from Gaspé, Québec.

The big party tonight is all everyone talks about in our house. What to wear: the sparkly red shoes that pinch the toes or the green satin ones that slip off the heel? The salmon dress with maroon flounces or the yellow and lime green? Hair up with curly tendrils over the forehead or ringlets over the shoulder? Should George drive the coach alone in full livery or should Tom, his boy, be in attendance too, also in livery?

By everyone, I mean of course Mummy and Emelda, my older sister.

“But I want to stay home tonight,” I wail. I’m reading this terrific book about a man on a desert island, but I can’t tell Mummy that. She detests books.

“How will you find a husband if you stay at home?” Mummy asks, primping up the bow in my hair. I jerk my head away. I want to be in a shipwreck and washed up on a desert island, not find a husband.

Later I catch Freddie as he’s about to go into his study. Mummy snagged Freddie last summer. Just in time, according to Mummy’s financial advisor. I tell him about needing to stay home to read my book, hoping END_OF_DOCUMENT_TOKEN_TO_BE_REPLACED

These shoes are gorgeous, I say to him, but they are awfully big. Why would anyone make such huge shoes?

They were made for a big girl, the old guy says. Or rather, for a girl with big feet.

When I say girl, he says, I mean young woman. Beautiful, she was. But I had no shoes to fit her. She was so disappointed. She loved a pair of red shoes I had, and some green sandals  – like those over there – with little tassels. But they were both way too small.

I imagine she was a blonde, I say to him. She’d have to be. To go with those shoes. Or did she have long black hair? And I bet she was dressed in one of those pencil skirts. You know, with a slit up the side.

I don’t know about that, he says. I only noticed her feet. You should have seen those feet walk. No tripping or stumbling for them. I’ve never seen feet walk so steadily, so firmly. They were the kind of feet END_OF_DOCUMENT_TOKEN_TO_BE_REPLACED

She cast the runes, she threw the stones
And read them, softly crooning.
A fruitful journey, she intoned,
Is what I here see looming.