Last summer, inspired by Thursday Doors master Norm 2.0’s post, we decided to drive the King’s Road (route 138) to Quebec City en route to Charlevoix rather than the much much faster autoroutes 40 or 20.

I insisted we start right from the beginning of the King’s Road. This meant creeping along rue Sherbrooke through the city and past some rather desolate areas in the east end of Montreal where the oil refineries used to be. It took us an hour and a half to get off the island.

The Moulin de La Chevrotière was most definitely one of the loveliest sights on the King’s Road (which is full of many lovely sights). 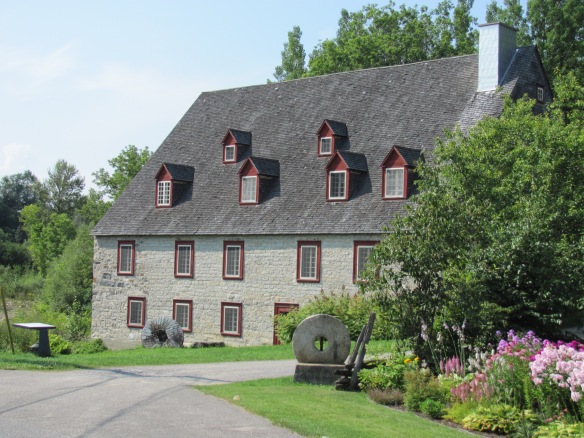 Built in 1802, the magnificent grain mill was renovated in the late 1970s.

Inside there was a marvelous textile art exhibition and…a door museum.

This deconstructed door labels all the parts. In French, of course.

Sixteen panes of glass in this door that was made locally and dates from the second half of the 19th century. I like the fancy trim framing the panels on the lower half and also the round bar with a lip at the bottom which the label called a “jet d’eau”. I might put one on my front door to keep rain soaking into bottom of the door.

La porte cloutée – nailed door – is one of the oldest techniques for making a door with the nails creating a design in themselves.

…and the mustache hinges…

…and even a double mustache hinge! 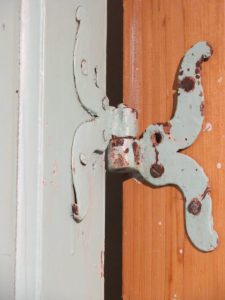 This latch reminded me of the cottage where I was brought up in England! 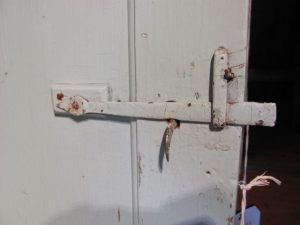 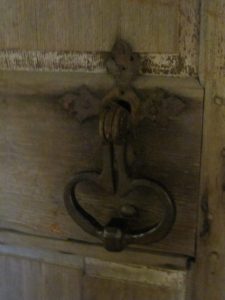 The Moulin de La Chevrotière is in Deschambault-Grondines, QC. We stayed at the wonderful Auberge Chemin du Roy right nearby in Deschambault, QC. What a breakfast!