I know Oliver claims to have been the first to see the ghost man, but in fact it was Tommy.

Tommy was heading home for breakfast with two brook trout he’d caught in the stream that meanders through the town when he caught sight of the ghost man emerging from the forest.

He’d wolfed down two helpings of french toast before he thought to mention the ghost man to his parents.

Word spread in no time. By elevenses there was quite a crowd in the park where the ghost man had installed himself on the bench beneath the big old oak. 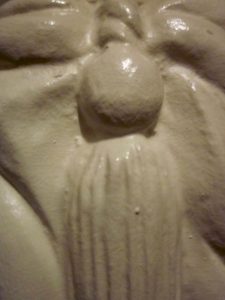 “The mushroom man!” said the mayor.

The first thing they all noticed about the mushroom man was obviously that he was extraordinarily pale.

Of course he’d be pale, they told each other, with the forest so dense and tangled that no sunlight could penetrate. (But really, how would they know? Which of them had ever dared venture into the dark, dank, silent forest?)

The second thing was that he looked at them with eyes that saw more than they were comfortable with.

The third thing? That his bulbous nose had a permanent sniff.

They would have liked to see his teeth because one can tell a lot about a man by his teeth but his inordinately long mustache obscured his mouth.

He communicated with grunts and squeaks. But he didn’t communicate much. Probably because no one understood what he was saying.

Mostly he sat on the bench in the town park.

He had that distinct mushroomy smell about him that wasn’t unpleasant but wasn’t what you’d want for yourself.

The townspeople were kindly folk. They gave him muffins, the odd cup of tea, a slice of pizza, a doughnut. They wouldn’t actually hand these to him, just leave them on the next bench. No one saw him pick up the food but it all disappeared.

The real question was: how many more mushroom men might be in the forest?

As long as they stayed in the forest, all would be fine.

But why was he here? What was he watching with those too-seeing eyes? Was he a spy? Had he been sent to reconnoiter the town? Did he have a camera or microphone hidden in his long mustache?

Were the mushroom men of the forest peaceful or violent? This one seemed peaceful enough. But maybe that was only a ruse?

They gave him rather better food — chicken legs, broiled carrots, mashed potatoes, ice cream — so he would report on their gentle hearts and generosity.

The mushroom man sat on the bench and mushroomed.

“If we feed him too much,” the mayor said. “The others will want the same and will come in droves and eat us out of house and home. Best not to give him anything. Then he’ll go away and leave us in peace.”

“But if we don’t give him anything,” someone protested. “They’ll get angry and beat us up for not caring for him.”

Best to be prepared. Just in case. Quietly, with not too much discussion, they armed themselves: bows and arrows, guns, knives, slingshots. They carried their arms secretly, hidden in baskets of apples and sacks of grain, among the loads of lumber.

“We should investigate the forest,” said the mayor one sunny day. “Just the edges. In case they’re already on their way. When they hear us, they’ll be frightened and run back into the depths of the forest.”

“But if they are frightened, won’t they attack us?”

“There aren’t any more mushroom men,” said Tommy. “If there were, they’d have come already.”

That’s the trouble with the young these days. Too quick to leap to conclusions. Too flibbertigibbety. They don’t think things through carefully enough.

The townspeople searched the edges of the forest. Nothing.

“We must go deeper,” declared the mayor. “The strongest and fleetest of foot must be ready to leave first thing tomorrow.”

“But suppose the mushroom men attack our nearest and dearest while we’re in the forest?” said Tommy’s dad who happened to be the strongest and fleetest of all.

The mayor pondered. “We will all go together for safety’s sake.”

With great trepidation, babies on their mother’s back, the elderly leaning on their walking sticks, every pocket stuffed with sausages and cheese and apples and knives and slingshots, the townspeople set off, keeping close together.

Deeper and deeper into the forest they went.

The mushroom man sat on his bench, empty stomach roiling and growling.

When darkness fell and the streetlights came on, he got up from the park bench and stretched, stiff after all the sitting. He headed down the street and knocked on the first door he came to, a pleasant green door. No answer. A push, the merest tap with a mushroomy finger, and the door swung open.

Thank you for dropping by to read this week’s Blurt. It was inspired by the Daily Post’s Weekly Photo Challenge: Abstract. “Point your camera at something familiar and turn it into something else.” The top photo is a close-up of the finial at the bottom of my staircase.

I’m also posting this in the Daily Post’s Discover Challenge: Obstacles because for the first time since I started this project in January, I got stuck. I started several different stories but they all petered out. Then I remembered that I’d promised myself that I’d write the Blurts very fast – so I went back to my first attempt and finished it up! I often find I create obstacles by fighting the flow! Once again I was reminded to go with it!